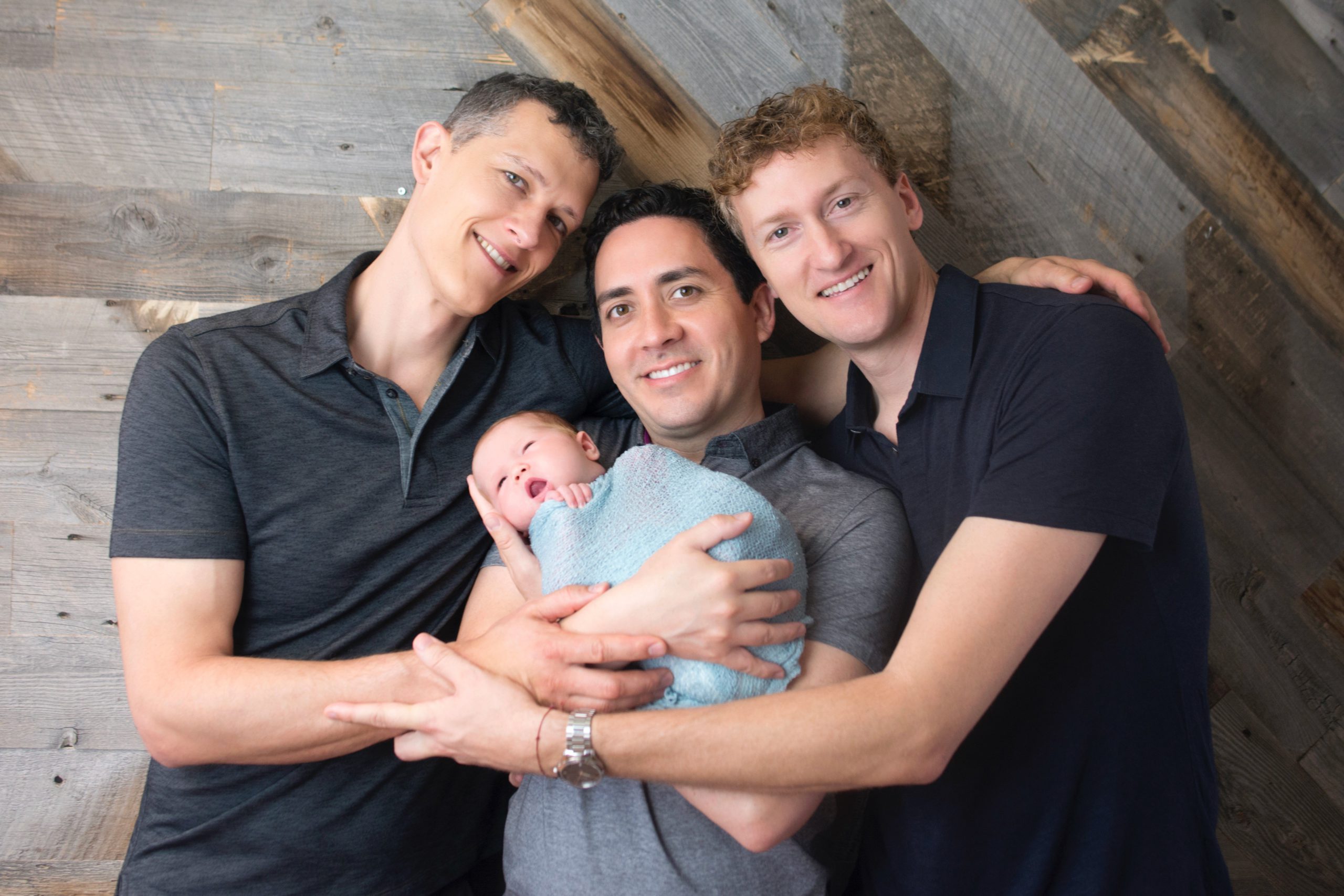 A family in California made history by being the first polyamorous family to have all parents listed on their children’s birth certificates.
Dr. Ian Jenkins, Jeremy Hodges and Alan Mayfield have been a happy throuple for almost a decade (Alan and Ian have been together since 2003 and started dating Jeremy in 2012), but hadn’t seriously considered starting the journey to parenthood until one of their friends asked if they’d be interested in adopting her unused embryos from her IVF. “Unfortunately those embryos didn’t take, but it started us on our journey towards having our two biological children,” explains Ian.
“Like many prospective parents, we had a stable home, filled with love, that we wanted to share,” adds Alan. And like any good parent, they wanted their children to be protected. “The most important reasons were practical ones,” says Ian. ” To ensure that our kids benefitted from things like our pensions, retirement accounts, and health insurance.”
“People might assume this was a search for validation, but we really did this to protect the family. First, you get real benefits from having a legal parent. If I had died and were not a parent, for example, my University of California pension would disappear. Now, the kids benefit from it until they turn 18. Second, there’s a lot of security involved, too. A legal parent can travel with a child, consent for medical care and take them to the doctor, and so on. We really appreciated having a copy of our certificate when we were asked why three men had a baby girl while we were vacationing in Mexico. Third, we really did want to set our obligations to the children in stone. As legal parents none of us can leave the relationship without providing child support, and all three of us will have a voice in parenting decisions and have a right to visitation no matter what happens. We have absolutely no expectation that our throuple will break up, but in the same way people make commitments in a marriage, we wanted to commit to the children and each other,” says Ian. “At first we assumed that it wasn’t a possibility, but when one of our multitude of lawyers informed us that he thought he could make it work, we jumped through what felt like a hundred hoops, a dozen lawyers, and a nail-biting court proceeding to accomplish it,” says Jeremy.
“There was no clear mechanism for us to achieve this,” notes Alan of the process that involved upwards of $120,000 in medical and legal fees and more than 20 legal contracts. “We consulted with many lawyers and, ultimately, they encouraged us to try to get all of our names on the birth certificate to legally recognize our intention to all be equal parents to our children.”
The day before their baby shower for daughter Piper in 2017, a judge decided that all three men would be allowed on the birth certificate, a historical move that gave them each equal, legal rights to their child. “[It was] extremely emotional — we went from a deep emotional low and sorrow, to elation within the course of about an hour,” says Alan. “When we initially walked into the courtroom, the judge expressed her doubts in ruling in our favor, and we walked out with a parentage order that we be recognized as legal parents!”
The turning point? Alan insisted that they themselves testify. “We got a chance to plead with the judge as people,” says Ian.  “That’s ultimately what did it, and then we received our court ruling with our families and the bio mom watching, and many tears were shed. It really felt like the climax of a legal thriller!” 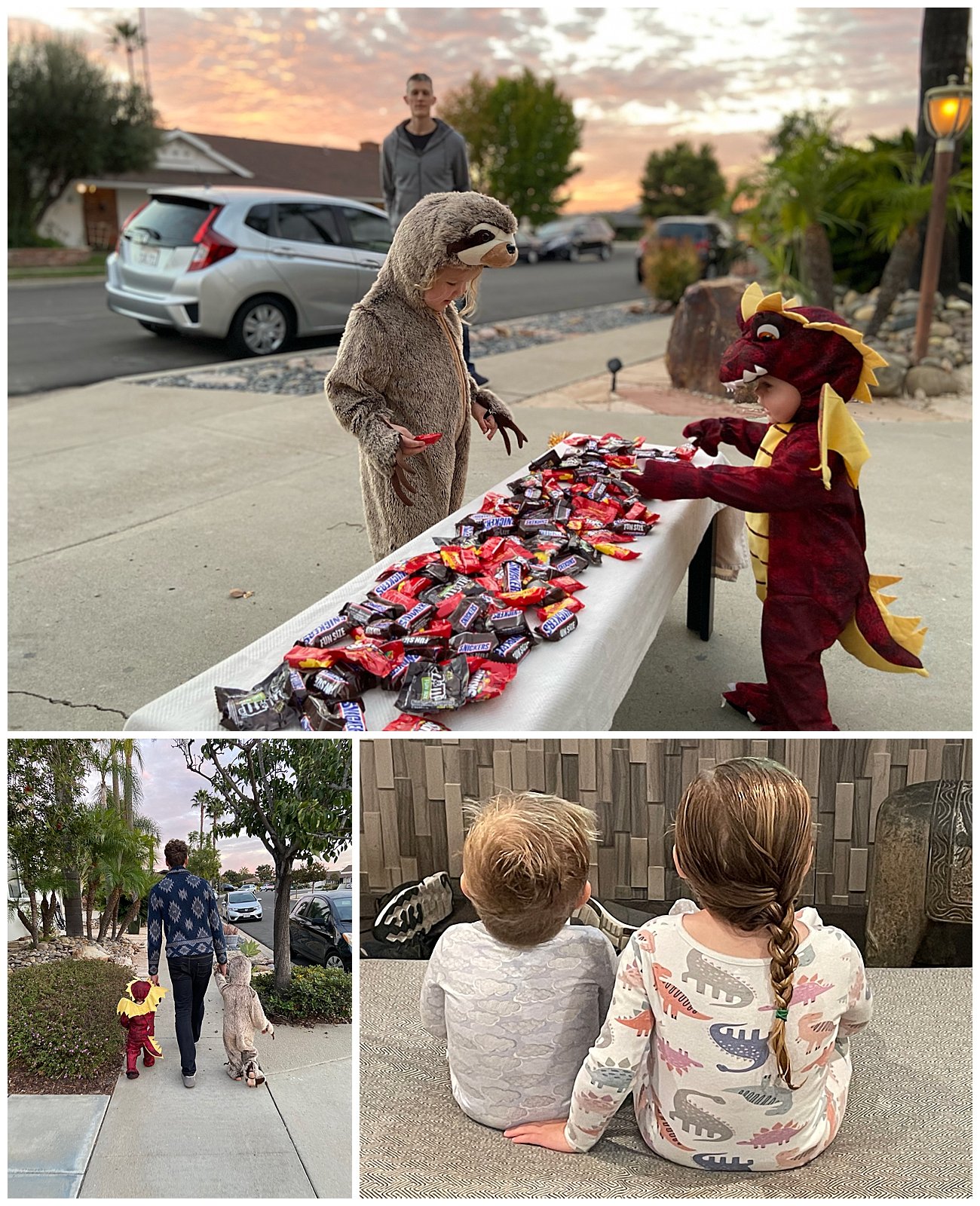 And in 2019, they welcomed son Parker with all three dads on the birth certificate, no court date needed.
The family of five is just like any other family (Ian is Papa, Jeremy is Daddy and Alan is Dada), navigating this emotional rollercoaster of a ride that is parenthood. But they do have one advantage, which came in particularly handy while quarantining during a pandemic. “The reality of having more hands on deck than most couples!” says Alan. “It really helps us to just get the basic daily parenting tasks done while still being able to focus on ourselves and each other.  There are very few parents I know who are couples who wouldn’t want to have a 3rd parent to help them out some of the time!”
“And because there are three of us, it felt more like a group than I think a couple would have felt, so we never felt as isolated as some of our friends,” adds Jeremy of their experience this past year. So will poly partners soon be able to all be on the birth certificate? We can only hope so, but just as we’ve seen for marriage equality, and same-sex adoption, it will likely be a state-to-state battle. “We heard from our lawyers that this case has been discussed at conferences up and down the West coast, and because California leads the way with family law, we hope to see these opportunities expand to other families,” says Ian who has recently published a book documenting their journey titled, Three Dads and a Baby. “In Massachusetts, nontraditional families have been protected by ordinances and multi-parentage would be the logical next step there. And over time, we think that courts will see the best protection for kids is to recognize the family realities that already exist.”
“Families come in all shapes, sizes and variations in this country. Poly families have been raising children long before our legal case, and denying that reality under the law likely does a disservice to already existing families and children,” adds Alan.