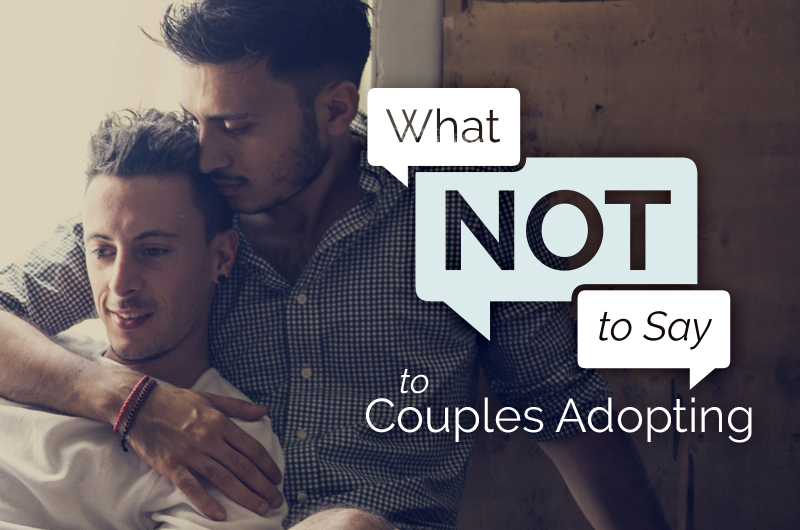 8 Things Not to Say to a Couple Who’s Adopting

When two people decide to expand their family, it’s an exciting time. There are parties to plan, pink or blue announcements to send, tiny clothes to buy and the nervous yet exhilarating rush to get everything ready for that little one that will soon join your family. This is a reality for all expecting parents, whether they’re expecting by conception, surrogacy, or adoption. And when it comes time to share the exciting news that you’ve been itching to shout from the rooftops, you hope that your friends and family will share in the sheer joy that you’ve been feeling ever since that moment you discovered your life would never be the same.

But for couples who adopt, sometimes the sharing of their newest addition brings more pain than joy. A pregnancy announcement is often met with tears, joyous smiles, and anxious fingers reaching toward round bellies, whereas an adoption announcement is usually first met with a question and an eyebrow raise, a sometimes blunt pry into the intimate makeup of your family and reproductive status. But we know that most of the time, everyone means well and the hurtful responses usually come from a place of ignorance, which is why we’ve collected a helpful list of responses to avoid when a couple shares with you that they are adopting.

We like to instill hope into the lives of people we care about, so when we see a friend who so badly wants a family but is struggling or unable to conceive, we say things like, “Just keep trying. It will happen for you guys! It has to.” The problem with these well wishes is they fuel unreasonable myths such as, you’ll magically get pregnant after you adopt. For some people, it’s not scientifically or physically possible for them to conceive, and although it comes from a good place, ultimately, it’s hurtful. This kind of statement also contributes to the idea that adoption is solely a last resort, which for many, many couples it isn’t.

How much did he or she cost?

It’s no secret: children are money-suckers. They cost money before they are born and often before they are even conceived. It could be in the form of doctor’s appointments, ultrasounds, fertility treatments, adoption fees, or hospital stays. But when parents bring their newborn home from the hospital for the first time, friends and family don’t greet them at the door inquiring about the price tag of their small bundle of joy as if they just plucked him or her off a crowded shelf and tossed them into a grocery cart headed for check-out.

This loaded question suggests there is only one way to have a family and attempts to invalidate parentage by insinuating that a couple seeking adoption had to pay for their family in a way that another family didn’t. But the truth is, children are expensive, no matter your avenue. The amount of money that you put into having a child whether through conception, surrogacy or adoption is irrelevant. But if you’re truly interested in the process of adoption, most parents are more than happy to discuss the details.

Or, often more blatantly, what’s wrong with you? Can you not have children? Most people view adoption through a lens of last resort even though its a beautiful way to create families that should be talked about more often and openly. But when the question is posed in a way that assumes something must be wrong with a couple for them to explore adoption, it’s rude and painful to hear. The truth is, adoption isn’t always a product of couples not being able to conceive. In fact, adoptions are becoming increasingly more common among families, and with it, hopefully the previous stigmas about adoption will be shattered.

Don’t you think a child should grow up in a traditional home with both a mother and father?

Parents all over the world wear a plethora of hats. Single dads, widowed mothers, divorced parents and even brothers and sisters raise children every single day in a home that doesn’t have a mother and a father. It’s time that we redefine the traditional family, because the truth is, families come in all different shapes and sizes. And the only thing that should matter is whether or not the child is going to be loved. The dispute that two moms can’t provide masculine-gendered guidance or that two dads can’t offer maternal love is misguided and outdated, and we need to stop criticizing a family with two loving parents just because they don’t fit into the mold of what you think defines a family.

It was only earlier this year that same-sex adoption became fully legal in all states after a ban in a few remaining states had been lifted and adoption among the LGBT community continues to rise. It’s time we recognize that who you love doesn’t dictate what kind of parent you can be.

Anything that mentions the child’s “real parents.”

Why did the real parents give him up? Are you worried her real parents will want her back? Perhaps the word you’re looking for is biological. We know you probably don’t mean it when you say it, but suggesting that adoptive parents aren’t real because they aren’t biologically connected doesn’t delegitimize their role as guardians.

Although statistics show that today a majority of kids are aware of their adoption, everyone has a different relationship with their child’s birth mother, and it’s an intimate thing to discuss. Trust us when we say that most of the questions you have about the birth parents, the adoptive parents have also had. In fact, it probably keeps them up at night.

Don’t you want children of your own?

This question is tricky. We’ve all thought it and many have asked it not realizing its painful underlying implications. Following the real-parent discussion, this question suggests that adopted children aren’t as legitimate as biological children. When two people open their home to a child, whether that’s through adoption, surrogacy or conception, that child is going to become their own. We need to stop using these types of terms that contribute to the division of families whose genetic makeup is different than that of the “norm.” Not everyone is able to have children through conception. That’s just a fact. But thanks to adoption, everyone can have a family.

Which one of you is the real mom or dad?

Because it is nearly impossible for both parents in a same-sex relationship to be genetically related to their children, many LGBT parents turn toward adoption. One of the most common forms of adoption in the LGBT community is second parent adoption, when one partner adopts their partner’s biological child. Because of this, people tend to be curious about which one is the biological parent, causing that horrible term “real parent” to surface. But the truth is, genetics aren’t the only foundation of a family, and the parent related by genetics isn’t any more a child’s parent than the one who isn’t.