A Gorgeous Beach Expecting Session with an Incredible Donor Story

Chelsea and Lindsay knew it may be more challenging but wanted to at least try the DIY route before turning to medical intervention to get pregnant. “I wanted to give us the best possible chance at success, so it kind of became a project for me to become an expert on my own body and preparing it for pregnancy,” says Lindsay. “We casually searched for donors online for months through banks and a known-donor registry and in both cases we just felt unsettled, unconvinced, and turned off by the whole thing. Aside from obvious things like genetic and health screenings, we really wanted to find someone with features similar to Chelsea’s, which I think is pretty common.”

Fate intervened while the couple was out for a date night in Rome. “We ended up having the perfect donor cross our path and decided to take a leap of faith and reach out just to see if he would be open to helping us. It was probably one of the boldest things I’ve ever done, and the most rewarding,” says Lindsay.

“We didn’t just find someone that checked all of the boxes, we found someone that opened up and gave us the opportunity to take a peek into his soul. Chelsea and I knew immediately that we had found a really wonderful human, and one that aligned with who we are on a deep level. The whole thing was truly a spiritual experience and, I believe, divinely orchestrated.”

Once their angel donor was found and all necessary tests had been conducted, they found out that freezing and shipping the goods wasn’t a viable option. “For a moment we were devastated and felt like maybe we were back at square one, but we quickly pulled ourselves together and decided that we had to try. So, we hopped on a plane in the middle of the pandemic and flew 1,500+ miles to make our miracle baby!”

Using the Mosie Baby insemination kit, they successfully conceived. “It sounds crazy, but we both had a strong feeling right away that we had just successfully made a baby. But when that second pink line appeared a couple of weeks later, we were in a state of complete disbelief, and stayed there for a long time. It just felt too good to be true for a while! When we finally made it past that, pure joy is the best word to describe it. Total obsession over all things baby-related and constant overwhelming gratitude.”

Their daughter Olive Bee will be born into a village of family and friends who have loved her from even before she was conceived. “We’ve been totally blown away at the amount of love, support, and help that we’ve received from our people who have been there throughout this entire journey, and we couldn’t be more thankful.” 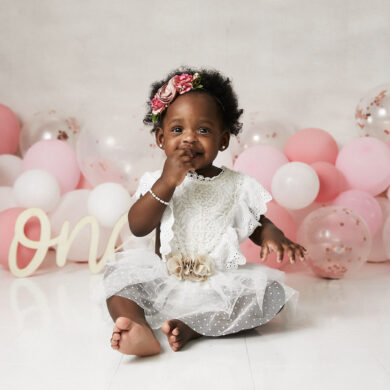 Balloons, Accessories & Lots of Pink: This Cake Smash Sesh Is Filled With Cuteness