When Adam was growing up, he spent afternoons with his dad bonding on hunting trips through the vast prairies of Manitoba in Canada. And now that Adam and Rebecca have a child of their own, they brought their smiley daughter, Riley, back to the same spot where Adam would hunt with his dad for a memorable family photo shoot.

Sara Taplin Photography captured this glowing family in the natural light to commemorate all the toothy smiles and loads of laughter shared by these three. We just can’t get enough of one-year-old Riley and the love between Adam, Rebecca and their sweet daughter. “We have 13 nieces and nephews, so we’ve been surrounded by kids for years,” Rebecca says. “Having kids has always been something we both dreamed of.” But getting pregnant proved to be tricky with Adam and Rebecca working hundreds of miles away from each other. And then on Boxing Day two years ago, Rebecca’s sister gave her a pregnancy test as a joke. Rebecca indulged in her sister’s stunt and took the pregnancy test also as a joke.

But when the stick turned blue, it wasn’t a joke at all. Adam and Rebecca were pregnant! Nine months later, their little girl was born. “Riley is a bundle of joy,” Rebecca says. “She’s very serious when she first meets someone, but after about 10 minutes, she is smiling non-stop. She has never been afraid of strangers and will literally leap to anyone and everyone.”

10 Same-Sex Family Outfits for Your Littles 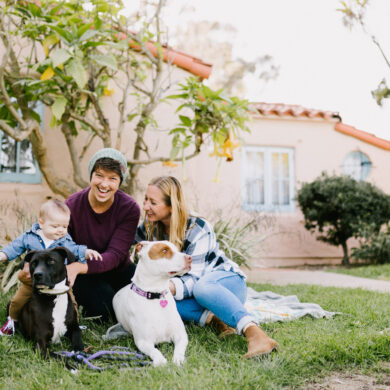