What’s even more of a surprise than an unexpected proposal? One proposal turning into two! That’s exactly how it played out for Tarin and April.

Neither bride knew that they both were about to pop the question to one another on the same exact day. Not only that, but they also didn’t know that they both had hired Cynthia Viola to document the moment too!

They had hopes of doing so on 2-22-22 when the weather took a turn. “​​Due to bad weather, I had to move the date up one day, to 2/21/22 since I had planned the proposal on top of a mountain,” says Tarin of her plans. “I scrambled to reach out to the photographer to make sure she could still shoot our proposal a day earlier. All while I was making sure my plans were still a go, April was planning her proposal to me secretly. Crazy enough, but we both hired the same photographer and she had to keep quiet about our proposals to one another.”

You may be wondering how on earth this could play out? Spoiler alert: it did and it did so beautifully!

Tarin was the first to get down on one knee at her chosen location, Grandfather Mountain. “When we arrived at Grandfather Mountain, I walked April to the cliff’s edge and talked with her for a minute about the beautiful view. She was suspicious once she saw the ‘nature’ photographer inch closer to us to capture my proposal unfold. I knew I had to be quick so it was still a surprise,” recalls Tarin. ‘I got down on one knee, wearing high heels nonetheless, and asked her to make me the happiest woman alive and marry me. She threw her hands over her mouth in surprise and said ‘YES!’ We continued with shooting some amazing shots on top of Grandfather mountain all while people were cheering us on and congratulating us on our engagement.”

One hour later … it was April’s turn to pop the question!

“April drove us around aimlessly before our dinner reservations. She stalled at a coffee shop to buy her some time. Little did I know, she had the SAME photographer I used an hour earlier, setting up her proposal to me with flower petals in the shape of a heart, getting our favorite songs compiled and ready to play when she got me to the destination, arrangements from a local florist, and a handmade sign asking me to marry her. “

After getting Tarin to commit to a blindfold, the two were off to Overlook Barn. April led Tarin to the romantic spot and handed her an envelope with a letter inside. “As soon as I took off the blindfold, much to my surprise, I SAW THE SAME PHOTOGRAPHER I used an hour or so earlier,” exclaims Tarin. “I was shocked to see her there but she whispered ‘Don’t mind me, keep going.’ The minute I turned around to look for April, I heard the song “Marry Me” by Train come on and I smiled so BIG.”

With a classic white gold diamond band for Tarin and a white and rose gold cushion cut diamond for April, the two were filled with excitement and in awe of how the day played out.

“I felt like I was inside a fairytale that I never knew to exist,” says April with Tarin adding, “I couldn’t believe we both proposed on the same day and neither of us knew. I couldn’t be luckier to have her as my forever partner.”

If this story isn’t proof that these two are meant to be, we don’t know what is! 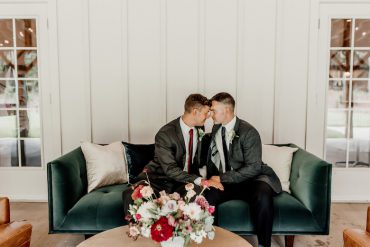