The night before Ryan and Tim’s engagement session, they decided to trade an urban setting in the city for the serene desert sunlight, a perfect fit for their Palm Springs wedding with a theme of two cowboys riding off into the sunset. With their white fluffy dog, Buster, in tow, Ryan and Tim explored the Southern California desert where a rainy winter spawned a rare super bloom, creating a breathtaking backdrop for their endearing engagement pictures.

“We’ve always loved the desert area around Southern California, and we’re getting married in Palm Springs, so it all felt meant to be,” Ryan says. With wild cacti abound and plenty of love in the air, Let’s Frolic Together captured the glowing soonlyweds in this smile-filled session that is sure to leave you grinning from ear to ear. The first time Ryan and Tim dated, they weren’t ready for happily ever after. After being introduced by mutual friends, they went on a few dates but eventually went their separate ways. Years passed by before they reconnected at a street fair, and this time, everything fell perfectly into place.

After eight years together, Ryan says it was more than clear that Tim was the one. “We’ve known at different points throughout our relationship together,” he says. “We’ve survived the loss of very close loved ones, changes in careers, work-based long distance and a lot of the other big stuff that lets you know this is the one that will stand by you through it all.” “We were at home in Santa Monica on a perfectly overcast day eating fancy donuts and watching ‘CBS Sunday Morning’ like two happy old folks,” Ryan says. “Tim randomly asked me to stand up for a minute because he had something he needed to tell me.” As Ryan stood up, Tim appropriately tuned his phone to Paula Cole’s “I Don’t Want to Wait.” And even though that song is part of an inside joke between Ryan and Tim, Cole’s lyrics, “I don’t want to wait for our lives to be over; will it be yes, or will it be sorry?” resonated as Tim got down on one knee with a ring in his hand and asked Ryan to marry him.

“Despite the fact that we had been teasing marriage for a while now, it was still such a powerfully charged moment that both of us barely remember the specifics of the speech,” Ryan says. Ryan, of course, said yes, and looking back on the day Tim proposed, he remembers how perfect that moment was. “The best part for both of us was that it felt true to who we both were — somewhat unplanned, intimate, within our most comfortable space and just for the two of us,” he says. “We chose matching platinum classic bands from Harry Winston because I really wanted to have at least one legitimate Rodeo Drive moment in my life,” Ryan says. 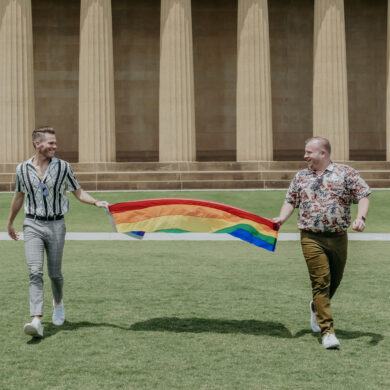