In Central Park in New York City, Chelsea Matson fabulously captures Evan and Kyle’s intimate, playful chemistry that has withstood the test of time and distance. “It represents one of our homes and souls for us as a couple,” the handsome gents gush of their e-sesh locale. “New York City is the meeting place of millions of diverse peoples landed in one small location, where culture oozes through its veins and pockets of every type of community are so very strong. It is a location where we can date, hold hands and kiss without the bat of an eye. Unfortunately, that is not the case everywhere, and we could not be more thankful for the opportunity to spend time here.” Between casual park bench cuddles, Evan and Kyle remind one another throughout this engagement session that regardless of how hard the rain pours around them, standing under the umbrella of their love will keep them dry and cozy for years to come.

Evan and Kyle exemplify the kind of genuine love that we all hope for: a love that is not only at its best when all the stars of life are perfectly aligned, but also at its best when life is the most difficult. This romantic saga actually begins in Northern Ireland at Queens University in Belfast, where a handsome medical student meets an outgoing city planner in pursuit of his Masters degree. “We both were living in a graduate student housing accommodation called Willow Walk. I had seen him on a number of occasions and always thought he was very handsome, but he seemed to be dating someone at the time,” Evan reminisces of the elusive Kyle. “After joining the athletics team, I made friends with a number of medical students who also lived in Willow Walk. There are a large number of them and they tend to be very inclusive, so when they started discussing a guy that also lived in Willow Walk, my attention started to perk up. They claimed he had just stopped seeing someone. After a month of being friends with the medical students, I was studying in a common area when, sure enough, our mutual medical friend strolls by with Kyle. I instantly became extremely red, as my skin is translucent and I am not very skilled at hiding my feelings.”

In an attempt to navigate around Kyle’s bashfulness, Evan made every attempt to reconnect with Kyle after their initial meeting, but to no avail. Then, at a St. Patrick’s Day party a few months later, fate stepped in to intervene. “Kyle was sitting next to a beer pong table — and I don’t mean to brag, but I am very talented at beer pong. So, after a couple of drinks and some casual glances, I decided to ask him to play. He once again told me that he could not and that he would watch. I went on to win and lose a few games — very unlike me — and we went on drinking until about lunch. Later on, I found him at a coffee shop for a little afternoon pick-me-up. As we were chatting in line, he was very sweet and all his shyness finally was starting to shed away. He was witty, smart, funny and adorable. At one point, the guy he had been seeing showed up and my heart sank. After that brief interaction, I decided to ask him if there was anything still there. His response: ‘I don’t like him anymore. I like someone new.’ Then he grabbed me and kissed me. I know … poetry for the ages. I thought so. After kissing a bit more and completely becoming smitten, we went dancing with the rest of the group and everyone else started to melt away. It was just the two of us and I could not believe how great he was.”

It’s a pretty strong sign when you can cover any topic you can think of with the person you are meant to be with and speak candidly and comfortably, sharing, learning and growing from dusk til dawn. “I have never been so challenged by someone yet felt so comfortable,” Evan tells us. “He is my other half: the part that I need to live a fulfilled life. He is passionate and does not give up on his values no matter what, which is very important to me. He wants to explore the world and do it with a pug in hand. He is amazing with kids and fights for social justice as a leader of the pack. There are very few people like him in the world,” Evan speaks with the utmost respect and admiration of his true love. Kyle shares a recollection of a casual date at Evan’s apartment during which they talked from 7:00pm until 2:00am, as an entire season of Girls played in the background. “I don’t think there was one topic I didn’t cover with him, but I was sold! It took him about three hours to get me a drink of water, but he claims it’s because he was nervous,” Kyle remembers of his adorable soul mate.

Two years later, Evan traveled to the North of England to talk to Kyle’s mom and sister about the ideal proposal for the morning after Christmas. “I truly had about six plans and all of them were foiled. Either the weather wasn’t cooperating or we ended up being at places we didn’t plan on. Tough stuff. Eventually, I asked him to go for a morning sunrise walk. He absolutely knew what was coming, but it was more about actually asking and taking the time from our scheduled life to have that moment where it was just us,” Evan explains. “Kyle’s house is located overlooking the old mines of North England. We got up early, had coffee in our thermoses, bundled up and walked through the woods to an old ruin that over looked the hills. I knew when and where the sun was supposed to come up, but at that time it did not. Then, after another 30 minutes of waiting, it still did not come up. Actually, I thought this was better. Kyle and I have not had an easy path being so far apart, with me attempting to move there through work, us having to spend a lot of money going back and forth and, despite having very generous people around us to help us out emotionally, even the best of relationships get pounded by distance… particularly a five time zone difference. But we have always come out on top and persevered through it all, because we knew we had something that no one else could touch. Something that only we knew how good it was.”

After pulling a slick James Bond-esque move by “accidentally” dropping a glove on the ground to prevent a mud-soaked knee, Evan knelt down to propose to the man of his dreams. “I told him that it has never been exactly how we pictured it, and to be here alone in this beautiful place with his family is exactly how I want it to be: a little bit messy but always the most special thing in the world. It was perfect. As we always say, ‘You are my perfect.'”

For Evan and Kyle, the ring is heavy with symbolism and meaning, the journey of their relationship reflected in the precious metal. “The ring is thin, strong and white gold. It describes us as both a couple and individuals. White gold scratches very easily, but always retains its shine. Our relationship with visas, distance and working has never been easy. We have struggled to get back to one another and have been challenged with a lot but we always retain our shine. It makes us unique and we would not be us without those scuffs.” 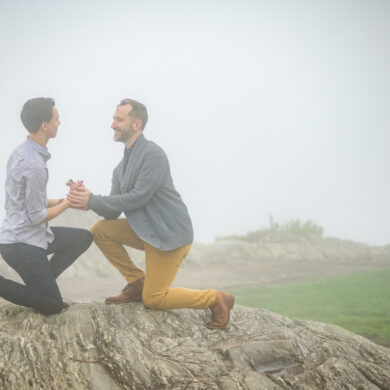