Erica and Bryan were meant to be from the time they were children—although, of course, they didn’t know it at the time! They’ve known each other for the better part of their lives, and now they’re spending the rest of their lives together. The couple was married at the beautiful Pleasantdale Chateau in West Orange, N.J., as 200 of their friends and family looked on. The images captured by Casey Fatchett beautifully show the happy couple surrounded by love and happiness on their big day.

Erica and Bryan have known each other for years (since the sixth grade!). Even so, their love story didn’t begin until after college, when they reconnected through a mutual friend. They began dating in 2008, and on their five-year anniversary, Bryan surprised Erica on an every day walk through Central Park with something extraordinary awaiting at the end: a proposal.

Bryan had planned the whole day without Erica having any idea, and after she said yes, he brought her to Nougatine at Jean-Georges, a restaurant overlooking the park, where both of their families were waiting to celebrate with them.

Erica walked down the aisle in an ivory silk gown with her something borrowed (her mom’s floor-length veil). Their outdoor ceremony was something straight out of a storybook: as the bride made her entrance to a string arrangement of Dave Matthews’ “You and Me,” deer and herons came out of the woods to join in the festivities. The couple planned their own ceremony “so that we could showcase the beliefs that are important to us: friends, family and embracing our unique relationship history.” Erica’s friend from college officiated and the couple exchanged original vows.

The wedding reception was designed with the couple’s history in mind, first and foremost. The table numbers were created with fun facts about Bryan and Erica, and included family wedding photos and photos of the wedding party as a way for the guests to get to know them in addition to learning new things about the newlyweds. The reception was filled with hydrangeas, roses, ivy and calla lilies keeping with the romantic outdoor ceremony venue.

The cocktail hour offered a medley of seafood, antipasti, crudités, carving stations and Mediterranean cuisine. At the seated dinner, guests enjoyed a walnut, pear and goat cheese salad; blood orange and ginger sorbet; an entrée choice of beef tenderloin or pan-roasted barramundi; and finally a dessert choice of chocolate and passion fruit parfait.

Speaking of dessert, Erica says that their cake is one of her favorite parts of the wedding. “It was the most beautiful thing I had ever seen!” she exclaims. Made by the infamous Sylvia Weinstock, the cake had alternating tiers of angel food cake with pistachio, chocolate mousse and raspberry filling, and chocolate cake with sour cherry, caramel and vanilla filling. The five-tiered confection also featured butter cream frosting and sugar flowered bunches corresponding to the couple’s color theme of dark purple, cream and apricot.

The bride, groom and their guests danced the night away to music from the Billy Stone Band. Their first dance was to Frank Sinatra’s “You’re Getting To Be A Habit With Me” – a truly memorable moment for the couple, because Erica’s aunt stepped in and sang it with the band.

Erica and Bryan’s childhood friend, Stephen Collucci, is the head pastry chef at Colicchio and Sons, and he made trios of mini doughnuts for the couple to use as favors. They handed them out to their guests with personalized packages of coffee and tea. 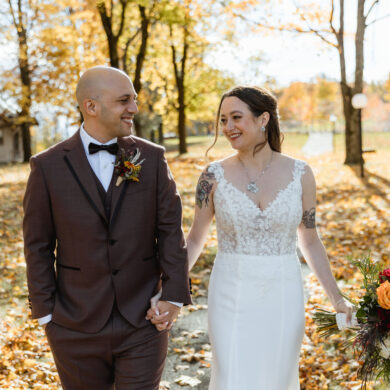