Before Kat met Steph, she had assumed true love wasn’t in the cards for her. “I was always on the outside looking in — until I met Steph,” she says. “I’d heard many times over the years that when you find the right one, you’ll just know. They were right!” Three years after they were introduced by mutual friends, Kat and Steph stood before their friends and family and vowed to spend the rest of their lives together at the historic Olivas Adobe in Ventura, California. Behind the lens, Sky and Reef Photography captured the magic of their perfect and sunny day, from the rustic design filled with succulents to endearing photos of the brides exchanging tearful vows. For a day Kat never thought she’d get to have, her and Steph’s wedding day was nothing short of magical. 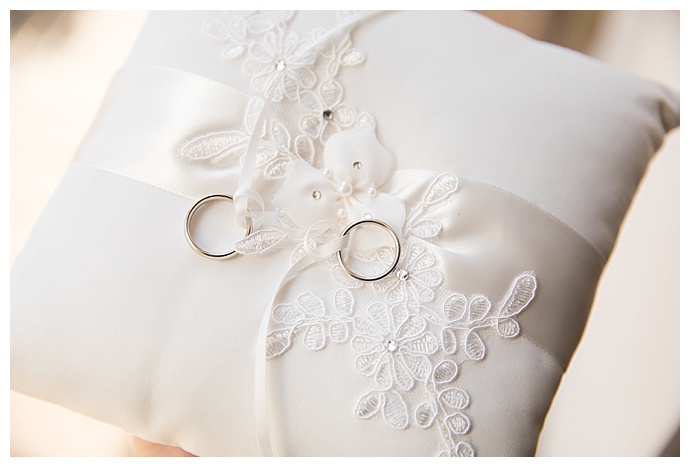 Before Steph and Kat had ever met, two of their mutual friends, Michelle and Jo, seemed to know they would hit it off. It had been a while since Kat had attended the weekly wine club they held at their home, so on a night they knew Steph was planning to be there, they convinced Kat to leave work early for a change and attend. Kat immediately caught Steph’s eye. “I approached Michelle and said, ‘hey, who’s the new girl?’” she says. So Michelle introduced them, then later in the evening Jo introduced them, and finally, just to ensure that they’d had a chance to connect, Michelle introduced them again. “By the third time, we both laughed and said, ‘yes, we have met,’” Steph says. After a few glasses of wine they got to talking and as Kat says, they just clicked. “Within a few months it was clear ‘we’ were meant to be ‘us,’” Kat says, and after six months, they moved in together.

On a Saturday evening in September, Kat and Steph were reflecting on a week of adventures they had during a week-long staycation in their home of Ventura. “We had each written out several possibilities on post-it notes, which we folded up in a big cup and drew out each day to see where our adventures would take us,” Kat says. They went to a new exhibit at the library, visited museums and had romantic dinners with plenty of wine. So as they were recovering on the couch at home from an exciting week, Kat told Steph she wanted to get her a ring. “I asked Steph to marry me, and she said yes,” Kat says. “I cried; I think she cried, and we started the next phase of our life’s journey.” he spring sun streamed onto the courtyard at the historic Olivas Adobe in Ventura, California, where Kat and Steph were tying the knot. They weren’t sure they could do it, but on the day of their wedding, they both managed to avoid seeing their outfits and each other before it was time to walk down the aisle. “The moment of seeing each other in the courtyard was so emotional,” Kat says. “And then walking together up the aisle, it was very special for both of us.” The brides entered the courtyard at separate entrances and joined together at the end of the aisle to complete the rest of the walk hand-in-hand. Their ceremony was personal and meaningful with good friends and family members at their side as they exchanged vows in a ceremony led by a close friend. “Having many special family members, some who traveled all the way from New Hampshire and old, old friends we hadn’t seen in years was especially touching,” Kat says. With succulent centerpieces and touches of burgundy underneath a canopy of string lights, the alfresco reception took on a gorgeously rustic feel. Kat made a sign with both of their initials that, when the sun set, lit up courtesy of eight strands of fairy lights. The brides shared a touching first dance before cutting into their three tier wedding cake that was adorned with succulents, and they spent the rest of the night on the dance floor celebrating with the people they love most. *Editor’s Note: This post contains affiliate links. Each time you purchase an item via our affiliate links, Love Inc. is receiving a small percentage of the sale, thus you are helping our small, EQUALITY-MINDED™  business grow and allowing us to provide more content for YOU! Isn’t that just fantastic?