The air was cold and Christmas was just around the corner when Megan decided she wanted to propose. She enlisted the help of Anne Casey Photography and coordinated a plan so that the proposal could be captured on film, but there was only one thing missing. “I called Jenna’s closest family and friends who all live in New Jersey to come down to be there with us for that day,” Megan says. “Jenna made a huge sacrifice by staying down here in Maryland to be with me after she graduated, so I knew it would mean the world to her to have all of her friends and family down to show their support.”

With the help of their family and friends, Megan pulled off an epic proposal that surprised her bride-to-be and left them both with documented memories that will last a lifetime. Although it was cold outside, this beautiful engagement full of raw emotion truly warms our hearts. 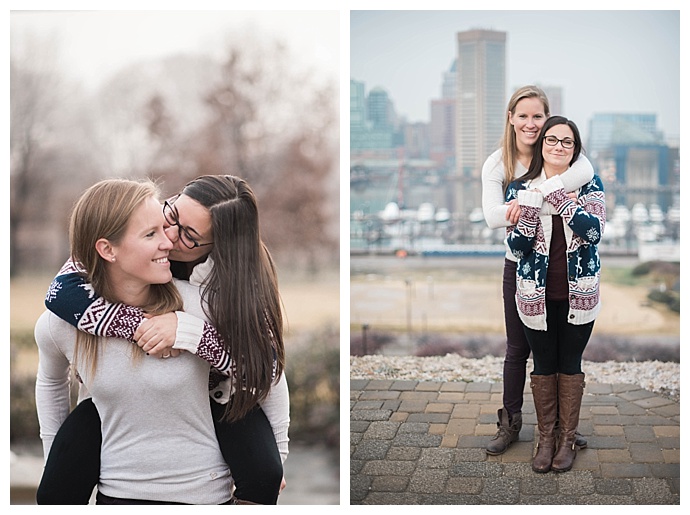 Megan and Jenna’s love story started on Tinder, where the stars aligned and they both swiped right not knowing it could lead to the beginning of forever. They hit it off immediately, and it wasn’t long before two unexpected moments made it clear that they had found the one they were meant to be with. “We were in my car sitting at the red light at Cold Spring and Roland Avenue,” Megan says. “Jenna was sitting cross-legged in my passenger seat singing along to the radio as cute as can be — that’s when I knew.” Jenna knew Megan was the one when they took a trip to the mall to see an elaborate Christmas train display. “We were holding hands and being cute when we ran into one of Megan’s students,” Jenna says. “We smiled and said hi as we passed, but she didn’t let go of my hand.” Jenna went with Megan to Federal Hill, a nearby park where they love to spend time together, under the premise that they would be taking last-minute Christmas pictures. “Of course it was icy and freezing cold that day, so it was a struggle even getting Jenna to agree to join me at the park for the photo session,” Megan says. “She reluctantly agreed, and we walked the three blocks, which felt like the longest walk of my life.”

They wandered through the park and posed for some pictures, until the photographer guided them toward the edge of the hill with a beautiful view overlooking the city and inner harbor. Meanwhile, Jenna’s family had assembled at the base of the hill to pull off an epic surprise with signs reading: Will You Marry Me? Anne Casey instructed the girls to stand with their backs to each other and then on the count of three, to turn around and do whatever felt natural. “We were standing back-to-back, and I was clutching the ring in my pocket,” Megan says. When Jenna turned around, Megan was dropping to one knee, a wave of emotion washing across both of their faces. “We celebrated by popping champagne, and in true Jenna and Megan fashion, the crew moved to Little Havana bar on the harbor to celebrate the engagement.” “I was standing back-to-back with Jenna while Anne was taking pictures, Jenna unknowing of the situation,” Megan says. “I looked down the hill and saw all of her family and friends standing there holding the signs. I took a deep breath, turned around, and got on one knee.” 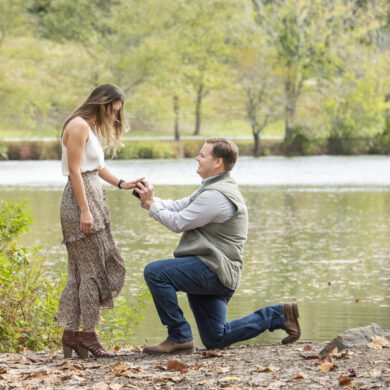