Meeting through a mutual friend while attending two separate colleges, Lisa and Bronson exemplify the way sparks can fly when opposites attract. With a laugh that warms the heart, the bold, vivacious Lisa knew instantly that she had found her rock in the unwavering calmness of Bronson. Taking stunning engagement photos during one of Bronson’s visits to Lisa in Maui, Hawaii,  Bella Eva Photography captured just how much these two go together, and they are as seamless as the tide greeting the sand.

From merely hearing a dear, mutual friend describe the ray of sunlight that is Lisa, Bronson had a gut feeling she would be the one before they even met in person at Warner Pacific College. “She was chasing a masters degree in order to become a teacher, was mixed with many cultures and a woman of God. All of this showed me her dedication, beauty and heart. I had always dreamed of these things but never thought I could or would have them from a special lady,” Bronson exclaims of Lisa. Once Bronson had the privilege of meeting Lisa in person, all of his instincts about his special lady were proven to ring true. “I loved her smile, her humor and her personality. By observing her dedication to school and her passion to make a change in life along with her love for God, I knew she was the right one. Lisa would ask intentional questions expressing how much she cared and traveled countless times back and forth from Newberg to Portland just to see me. It all confirmed the love she had for me and made known that she was the one for me.”

Two years after their initial meeting, Bronson proposed to Lisa on a warm summer day in June of 2014. Leading Lisa to think she was heading to a barbecue with friends, Bronson prepared a proposal for her that incorporated a different kind of walk down the aisle to John Legend’s “All of Me” and Mariah Carey’s “You’re Beautiful”. “Little did she know she would be walking down a long driveway of candles and ‘everything-I-love-and-appreciate-about-you’ notes in brown envelopes on tea stained paper, walking over red rose pedals toward me hiding behind a tree. I came out and told her that she is the best girl I have ever had and she is the last girl that I ever want to have, then asked her to marry me. She looked at me and emphatically said yes, wondering if it was real or a dream as I cracked the box open and placed the ring on her finger. Through tears, her voice cracked with nervousness and excitement. After our mutual friend who first introduced us, Jenny, took a bunch of pictures of us, we ate food, talked about what had just happened and later went out to see a movie.”

For Bronson, the day he proposed to Lisa was one that was infused with unforgettable details and the excitement of anticipation. “Her laughter as she walked up the driveway picking up her notes while I was waiting for her to meet me by the tree in the back was heart-warming. I thought she would be nervous, but it sounded like she already knew everything that was going on and was having a ball. The music was playing as my heart accelerated through each beat, and getting down on one knee, looking her in her eyes and asking her to marry me was the best day of my life.”

Lisa wears a peach pink morganite halo engagement ring with diamonds surrounding the halo and continuing half way around the ring band. “When I was on one knee, it felt like forever,” Bronson reminisces of the proposal. “I was so scared and nervous that I thought I would even accidentally put the ring on the wrong finger. When she said yes, it felt like I was on clouds and that all the hard work had paid off.” 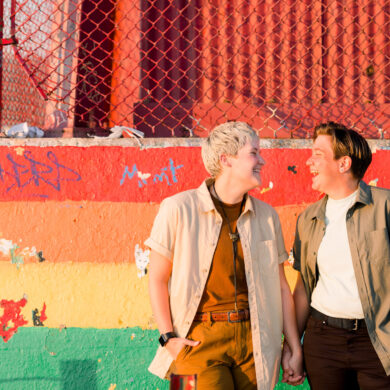